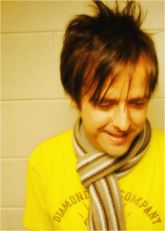 I meet with a group of friends in Manchester every month, and they all sense that something special is going to happen this year in their creative industries.

So far, for me it has been something similar. I have been approached to work with an organisation on music projects, and we are now ironing out the details. Core magazine has fired up again and we are planning an April 2nd issue. And I am now talking to a record company about a new release.

So all in all it could be a special year.
K

Happy New Year everyone.
Here's hoping that 2008 has everything we dream of.

For those of you struggling to get going in 2008, here is a little sidetrack....one of those incredibly obsessive games that you just can't stop playing. Rach-H sent it to me. (Feel free to send through other links you may find for me to share with the world.

Let me know your highest scores in the comments or on the tagboard!!

Have a great Christmas...!

Only a few days to go before we can really celebrate the event that changed the world forever. I hope that you all have a great time, with family or friends, and find a way to bring hope and peace into someone else's life as well.

I thought I would tell you about something we are doing here this year.

We aren't buying any presents this year! We've decided to print up our own cards, each with a picture of the kids we spent last Christmas with - on India's tsunami coast. On the back of each card we have printed:

This year
we have decided
to donate your present
to the kids of
Ambajipeta, India.

We spent
Christmas
with them last year
and we know
that they
will love your gift.

It was great last year to get out of the commercial trail of Christmas, and just spend time with people. We thought it was high-time we tried some of that back here. So this year our Christmas won't be about stuff at all, it will be about people.

Wherever you are - try it a little differently.

Hello again friends!
It's been a while since I have kept a regular blog, but now it's time to get back in the game. It has been a strange year, and maybe that will unfold as I tell my story.

For now let me direct you to an article in the New York Times: "The ideas that shaped 2007".
I like the one that starts... 'The best way to deflect an asteroid'. It's not something I've ever thought about. The winning idea - was to send up many mini satellites that act as 'mirror bees' to put the asteroid off course.

Maybe this year you have had 'mirror bees' trying to put you off course. I know i have. I also know that at times it has felt that my asteroid has not had enough power to reach the destination. But the good thing to remember is that I'm still on course - even if it's a little slower than I had planned.

Hey, we're just playing with some new designs to relaunch Keith's weblog, so keep checking back as we get it right!

Bravenet Blog
Get One For Free!
powered by